Master of Freedom: A Mountain Man novella by Cherise Sinclair 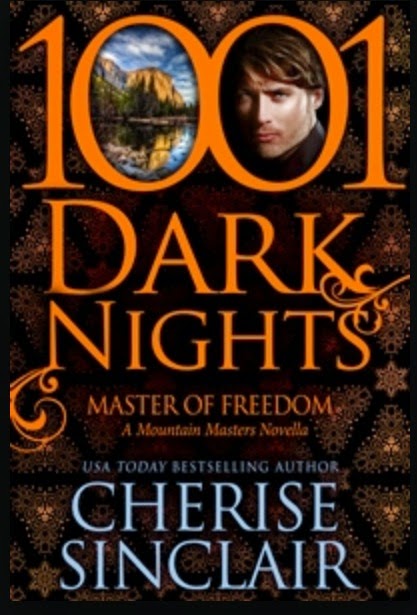 There was a tap on the door. Before she could answer, Atticus stepped into the cabin.
“What are—” Gin tossed her book aside. “I do believe you’re in the wrong cabin. This one is mine.”
“I know, darlin’,” he said. “I came to find you.” His gaze swept over her, making her all too aware of the lowness of her décolletage. “Gorgeous nightie, pet, but you quit the evening a little early, didn’t you?”
“It seemed appropriate when everyone grew…occupied.”
As he crossed the room, everything about him was cowboy sexy. Those long legs, battered boots, black hat, and bucking-horse belt buckle.
He went down on his haunches beside the bed, putting their eyes at the same level, then took her hand. “Listen, Gin.” He grinned, his white teeth framed by the dark brown beard. “Isn’t that a harsh-sounding word for such a pretty woman?”
Oh, he shouldn’t smile at her. It was too distracting. And he’d called her pretty.
“Gin,” he said again. “You wanted to learn about BDSM. Came all the way here. True?”
Under his penetrating gaze, her chest turned as shivery as if she were inhaling tiny bubbles with each breath. Stop melting and think. She put a chill into her voice to remind him of proper decorum—which didn’t include cabin visits to a woman in her nightwear. “It may be true, but I do not believe my interests are your concern.”
An unexpected dimple appeared on his right cheek above his beard. “If you want to freeze me out, that accent of yours ruins the effect. It’s like listening to warm honey.”
She gave an exasperated sniff and tried to free her hand. “Go on back to your students, please.”
“All done with them. They’re Jake’s now,” he said. “The way I see it, I owe you a class for helping me earlier. Let’s go to the pavilion where you’ll have some backup, and I’ll give you a taste of what you missed.”
“No.” The word jumped right out, but…lacked any conviction whatsoever.
And oh, he could tell. He didn’t move. Didn’t speak. His intent blue gaze stayed on her face.
She mustn’t. Shouldn’t. Actual participation would be insane. Stupid. Foolhardy.
But he’d said they’d go to the pavilion. Kallie’d rescue her if needed. Kallie and Jake might be friends with Atticus, but neither would permit anything abusive.
She’d scolded the heroine in her book for cowardice. Was she any braver? If she wanted to learn about BDSM, what better opportunity would she have?
Only…he’d touch her.
How badly she wanted his hands on her was disconcerting. Her swallow was loud in the quiet cabin.
Amusement lit his eyes.
Despite her inner quivers, she gave him a nod.
“Let me hear a yes from you.”
“Yes,” she whispered.

About MASTER OF FREEDOM:
Detective Atticus Ware gave up his beloved Idaho to start again in the mountains of California, close to his imprisoned brother. He has a rewarding job and friends, but the experienced Dominant wants more than the Do-Me submissives who flock around him. He needs a woman who will give her heart as well as her body.

Finally, Atticus has found the woman he wants in his life. In his bed. In his cuffs. But she’s not only his brother’s therapist, but also works in a prison. How can he tolerate his woman walking into danger every single blasted day?

Gin knows she has no future with Atticus Ware, but still, hope is rising in her heart.

Review:
First off, even though this is only a novella there is a whole story involved, sometimes with novellas your left feeling like something huge is missing or like you've just read a few steamy pages in the middle of a novel. This is not the case with Ms. Sinclair. In this story we read about Atticus and Gin. This is not your typical BDSM short read. Atticus is not only a rancher and police detective, but he is also an experienced DOM. Gin is a social worker coming off of a bad relationship with her ex-fiancée. She gets introduced into "the lifestyle" by some friends of hers.  Besides the smoking hot scenes between Atticus and Gin, there is another kind of action. A prison break and a kidnapping will get your blood pumping. Also our hero and heroine have some personal issues to work out. Through the trust they build in their sexual relationship they are allowed a way to communicate together to work through a pretty dark past. All in all a nice little read.
I was given this ebook free in exchange for an honest review

About Cherise Sinclair:
Having to wear glasses in elementary school can scar a person for life. Dubbed a nerd at an early age, Cherise Sinclair has been trying to live up to the stereotype ever since. And what better way than being an author?